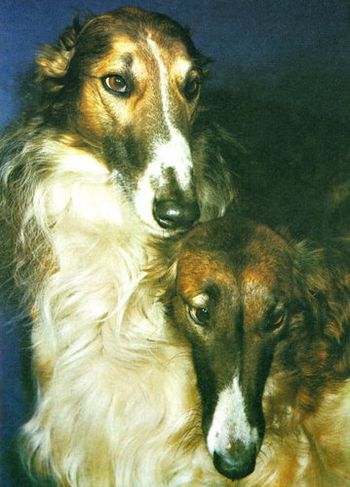 Share photo gallery
Borzoi
The Borzoi was formally known as the Russian Wolfhound; however, in an effort to maintain the same name as the rest of the world, the American Kennel Club changed the name in 1936. This breed’s origins date back to 17th century Russia by crossing Arabian greyhounds with a thick-coated Russian breed. They were bred by the Russian aristocracy for hundreds of years and developed to course wild game such as foxes, hares, and wolves, over the open plains of Russia by sight rather than scent. In wolf-coursing, a sport of danger and difficulty, there would be two dogs used on one wolf. They were trained to chase and seize the wolf behind the ears and throw their prey over. Once down, the two dogs had to hold the wolf until the huntsman arrived. Therefore, it was important that the two dogs should be equal in strength and courage as much as possible. Otherwise, any hesitation or weakness could result in the wolf getting away and/or potential serious injuries to the dogs. Upon the Borzois arrival in England, no such use could be found for the breed, and so the Borzoi was utilized for exhibition or as a companion.

They were bred by the Russian aristocracy for hundreds of years and developed to course wild game such as foxes, hares, and wolves, over the open plains of Russia by sight rather than scent.

Share photo gallery
For a time, the Russian Royal Family and Court had full control of this breed which was found only in Imperial kennels and of those of the Grand Dukes. One such nobleman, the Grand Duke Nicholas Nicolaievich, was recognized as one of the most renowned Borzoi breeders. Later, this rule was relaxed to include important landowners. During the Russian Revolution of 1917, many Borzois were slaughtered due to their association with the aristocracy. The survival of the breed was attributed to the handful of dogs previously exported to Europe and North America. Some nobility were able to flee with their Borzoi. One Russian woman escaped the war by pretending to take her Borzoi for a walk. Rather than carry a suitcase, she averted suspicion by wearing as many clothes as she could, topping off her ensemble with a large coat and hand bag. Together they departed the country and found sanctuary in England where she became a British governess. 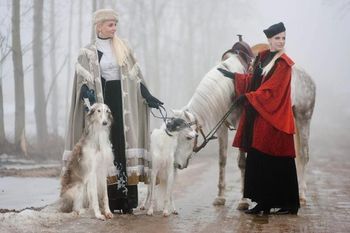 Share photo gallery
This is a particularly large breed. Males measure at least 28 inches at the shoulder and females stand at least 26 inches at the shoulder. Males weigh anywhere between 75 to 105 pounds with females weighing 15 to 20 pounds less. The Borzoi has a long, silky (not woolly) coat which can be flat, wavy or rather curly. On the head, ears and front of legs, the fur should be short and smooth, and on the neck, the frill should be profuse and wavy. The feathering on the hindquarters and tail should be long and prolific and less on the chest and back of the forelegs. The color of the coat can be any color or combination of colors. Borzois should be bathed and brushed on a regular basis to maintain their long lustrous coats. The breed’s temperament is described as independent, aloof, docile, and loyal. Because of their substantial size, young puppies require a firm yet gentle hand along with early socialization to avoid either shyness or aggression. They should not to be taken lightly or teased. The Borzoi belongs to the Hound Group and has been recognized by the American Kennel Club since 1891. 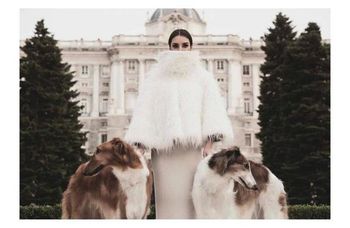 Share photo gallery
IMPORTANT NOTES: The Borzoi is a versatile breed that can adapt to country living or the city provided they have sufficient daily exercise. They are not guard dogs and should not be considered for sentry duty. Due to their coursing nature, Borzois are extremely fast and must be kept on a leash or in a fenced area as they will chase anything that moves especially into a busy street. It is essential that if a Borzoi is acquired into a home with felines or small dogs, they must be introduced as a puppy in order to adjust to other pets as family members rather than prey, or acquired as an adult previously accustomed to cats and small dog breeds. This sighthound has an abundance of energy and is not suited for families with young children.